Super Mario 3D All-Stars - a compilation of Super Mario 64, Sunshine, and Galaxy - has been announced and launches for Nintendo Switch on 18 September.

All three games feature from improved graphics, while Super Mario 64 gains HD rumble support, Super Mario Sunshine is displayed in widescreen, and Super Mario Galaxy benefits from Joy-Con gameplay to mimic the Wii Remote. Each game also features a soundtrack music player, with 175 music tracks included in total, playable even while the Nintendo Switch screen is turned off in undocked modes.

Launching on 18 September, the digital version is now available to pre-order from Nintendo eShop and will be available until the end of March 2021. A physical retail version will also be provided in limited quantities. 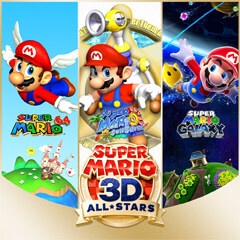