Sora from Kingdom Hearts has been revealed as the final new fighter joining Super Smash Bros. Ultimate as part of the second Fighters Pass.

Sora was revealed during the final Super Smash Bros. Ultimate presentation, once again hosted by director Masahiro Sakurai. The Kingdom Hearts protagonist will be available from 19 October (18 October in the Americas) as a standalone fighter or in the Fighters Pass Vol. 2.

As always, the Challenger Pack will include more than just the fighter: alongside Sora, the new Hollow Bastion stage will be added, alongside nine music tracks and a DLC Spirit Board featuring 8 new spirits. Five unique Fighter Spirits featuring Sora's different designs will also be available.

Sakurai revealed during the presentation that Sora was the most voted-for character in 2015's Smash Bros. Fighter Ballot, which was to be used to determine the final DLC fighter for Super Smash Bros. for Wii U and Nintendo 3DS; however, Sakurai and the late Satoru Iwata, then President of Nintendo, agreed instead to withhold the result to avoid any inconvenience or upset among other parties.

As an added bonus, players with save data for Kingdom Hearts: Melody of Memory on their Nintendo Switch will unlock a tenth music track - "Dearly Beloved: Swing Version" - for the game as well. It's unknown if the track will be made available to any players without the save data in the future, or if save data from the free demo will unlock it. 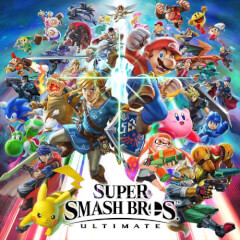