The next Pokémon TCG set will be called Astral Radiance and will focus on the new Pokémon and forms of the Hisui region.

Astral Radiance will be the tenth main expansion of the Sword & Shield series of the card game, which debuted in February 2020. The set will focus on the Hisui region from Pokémon Legends: Arceus, as well as Pokémon and characters that live there.

The set has been confirmed to include more than 180 cards (not including secret-rare cards), featuring 21 Pokémon V, 8 Pokémon VSTAR, 2 Pokémon VMAX, 3 Radiant Pokémon (a new Shiny Pokémon mechanic for the TCG), and more than 20 Trainer cards. It'll also have a 30-card Trainer Gallery subset with full-art Pokémon and Supporter cards.

Dialga and Palkia's new Origin Formes - along with the Hisuian forms of Decidueye, Typhlosion, and Samurott - are confirmed as five of the Pokémon VSTAR. The set's product lineup also includes a Darkrai-themed Elite Trainer Box, indicating Darkrai VSTAR is also likely to feature.

Astral Radiance will be released on 27 May. 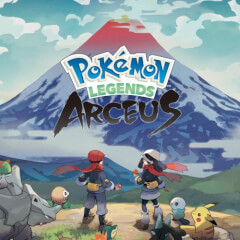