Nintendo has revealed new details about Paper Mario: The Origami King, including its locations, companions, and combat.

A new trailer released today for Paper Mario: The Origami King features a new look at the game's unique ring-based battle system, which lets players deal large amounts of damage to multiple enemies at once by lining them up and using a jump or hammer attack. Boss battles take this to another level, such as plotting a path for Mario to take around the ring to best attack the enemy.

Companies and other allies have also been revealed: some companions will join Mario on his adventure, while others will give him a helping hand in battle; in addition, Mario can help save Toads hidden away around the world, and seek out the help of Toads in battle as well. 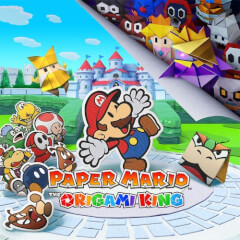