Miitopia, the quirky Mii-filled RPG for Nintendo 3DS, is getting a Switch release at the end of May.

As revealed in the latest Nintendo Direct, Miitopia will be making the jump from Nintendo 3DS to Nintendo Switch, with the high-definition version launching globally on 21 May. The game's description is below:

Embark on a hilarious adventure with friends, family or anyone you choose, to bring down the face-stealing Dark Lord. In Miitopia, a customizable adventure for Nintendo Switch, create and customize Mii characters of anyone you'd like, and cast them in the fantasy adventure of a lifetime. With expanded customization in Miitopia, including Wigs and Makeup, you can make your Mii characters look more fabulous than ever in this game! Also, you can have a horse as an ally. When you become closer, it'll lend a hand - er, hoof - in battle. Which Mii characters will you assign as allies... and who will become the evil Dark Lord? The lighthearted romp Miitopia launches for Nintendo Switch on May 21. 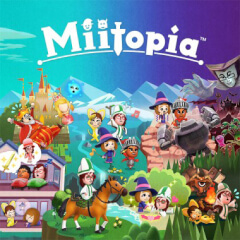