Limited Run Games has confirmed details of its Mighty Gunvolt Burst physical run, which launches for Nintendo Switch and PlayStation 4 this week.

Previously announced as part of the company's #LRG3 event in July, the Mighty Gunvolt Burst physical edition launches as an open pre-order on 28 August for Nintendo Switch and PlayStation 4. Contents are the same for both versions, though the PlayStation 4 version of the game is titled Gal*Gunvolt Burst instead, lining up with the digital release.

The standard version includes the game and all of its DLC on the game card or disc. A collector's edition will also be available, featuring a set of 245 pixel stickers, a soundtrack CD, and nine 3.5" acrylic character standees alongside a physical copy of the game.

All items will be available from 10:00 ET on Friday 28 August via the limitedrungames.com website. 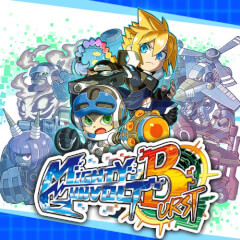