Mario Strikers: Battle League, the first Mario Strikers game since 2007, has been announced for Nintendo Switch.

Players can take part in five-a-side football matches with a variety of useful items and special shots at their disposal. Local and online play are both supported, with up to eight players being able to play 4-on-4 matches on a single console, and up to 20 players being able to join online clubs. 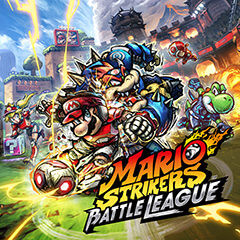