Mario + Rabbids Sparks of Hope to launch in October

A new trailer has been released for Mario + Rabbids Sparks of Hope, confirming a 20 October release date on Nintendo Switch.

Mario + Rabbids Sparks of Hope was first revealed last year, and after a long wait for more news, a new gameplay trailer was shown during the Nintendo Direct Mini: Partner Showcase. A release date of 20 October has also been confirmed for the game.

Alongside Mario, Luigi, Peach and their Rabbid counterparts, Bowser and Rabbid Rosalina are new additons to the party lineup. The gang are on a mission to save the galaxy from Cursa, an evil entity that wants to steal energy from the Sparks, special Luma-Rabbid hybrids.

Preorders for the game and its Gold Edition - which includes upcoming DLC such as new story content and weapons - are now available on Nintendo eShop.

Mario + Rabbids Sparks of Hope: The motley team of Mario, his friends and the heroic Rabbids – now joined by Bowser – blast off for a galactic adventure in the latest Mario + Rabbids game! The galaxy is in a universe of trouble when a dark entity, Cursa, wants to absorb all its energy. In doing so, it will try to capture the Sparks, creatures born from the merging of Lumas and Rabbids, and drain them of their energy, too. Now, the team must travel the cosmos to save the Sparks from Cursa's grasp and fight back in tactical, dynamic battles. Lead a team of three heroes and use a variety of tools to navigate the battlefield, flank your foes and find opportunities to thwart them. Mario + Rabbids Sparks of Hope rockets onto the Nintendo Switch system on Oct. 20. Pre-orders begin today in Nintendo eShop and in the My Nintendo Store on Nintendo.com. 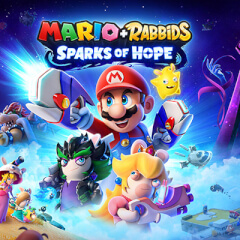