Hyrule Warriors: Age of Calamity, set in the run-up to The Legend of Zelda: Breath of the Wild, has been announced for Nintendo Switch.

While we've all been waiting patiently for the sequel to The Legend of Zelda: Breath of the Wild, Nintendo and Koei Tecmo have been plotting a prequel - of sorts - and have announced Hyrule Warriors: Age of Calamity, a Nintendo Switch exclusive launching on 20 November.

Hyrule Warriors: Age of Calamity takes place 100 years prior to Breath of the Wild, in the time before the Great Calamity, as Link and Zelda - along with the four Champions - fight to save the kingdom of Hyrule. All six characters are playable, meaning the Champions - Revali, Urbosa, Mipha, and Daruk - are playable for the first time.

While it features the same visual style as Breath of the Wild and recognisable Warriors gameplay, Nintendo says the game will also feature other mechanics including puzzles, crafting, shops, weapon and skill unlocks, and the Sheikah Slate. It'll also feature a story based around the Great Calamity and the characters involved in it.

The game is now available to pre-order from Nintendo eShop, and players who do so will receive the Lucky Ladle, an in-game weapon for Link, when it launches on 20 November. 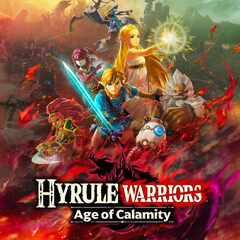