Dragon Quest Treasures has been confirmed as a Nintendo Switch title, and will be released at the end of the year.

Dragon Quest Treasures was announced some time ago, but until today, platforms for the game had not been confirmed. Following today's Nintendo Direct Mini: Partner Showcase, Square Enix has appeared to confirm the title as a Nintendo Switch exclusive, with a 9 December release date.

Dragon Quest Treasures will see players take on the role of Erik and Mia, siblings first introduced in Dragon Quest XI: Echoes of an Elusive Age. Players will recruit monsters in order to make use of their treasure-hunting abilities, and they will also come in handy during battles against other treasure hunters.

DRAGON QUEST TREASURES: It's a treasure hunter's paradise! Two siblings' treasure-hunting dreams become reality as they are whisked away to the magical and mysterious realm of Draconia. Erik and Mia, along with their cute companions Purrsula and Porcus, team up with a menagerie of skilled monsters to track down tantalizing treasure in this DRAGON QUEST series spin-off. Oodles of riches are just waiting to be found! X marks the spot when DRAGON QUEST TREASURES launches on Nintendo Switch on Dec. 9. 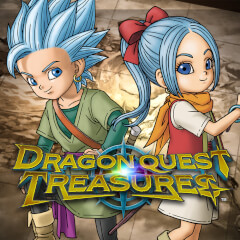