This engaging and creating JRPG features musically-themed boss battles, but does the pacing send this performance off-key?

Long-time JRPG fans on PlayStation Vita may well have interacted with the first iteration of The Caligula Effect, originally released in Japan in 2016 and followed by a western release in 2017. Despite underwhelming critical feedback, the game's popularity has endured, resulting in it gaining a new audience with The Caligula Effect: Overdose, a remake for PlayStation 4 and Nintendo Switch. This new version of the game includes improved graphics, additional paths to new alternate endings, and an entirely new feature known as the Forbidden Musician Route.

Playing as the protagonist, you are informed that a beautiful singer named µ (pronounced Mu) is responsible for the creation of the city of Miyabi, located in the synthetic dream-world Mobius, where you begin your journey. µ is a vocaloid, or vocal synthesizer software, who has become more than a simple conformist: over time, she has become aware of the pain and suffering of the people sending her music, and in response, created the perfect utopia now known as Mobius. The world traps the souls of those who can no longer handle the hardships of the real world and forces them to live through high school again and again as the version of themselves they most wanted to be in the real world. Among the trapped souls, there are those that become aware that they are no longer in the real world; these characters band together to form the Go-Home Club, and their goal is to challenge µ and the villainous Ostinato Musicians who send music to µ to keep the inhabitants of Miyabi brainwashed. As you progress, you'll also face off against the corrupted inhabitants of Miyabi, who view the club members as the real enemies for trying to ruin the idyllic dream-world of Mobius.

The Caligula Effect: Overdose includes a turn-based battle system that has some fantastic action elements revolving around an "imaginary chain" timeline within the battle. I've seen many different battle systems in RPGs, but this is the first one I've personally encountered with such cool timeline manipulation options, which help to make the initial slew of fights novel and interesting. Learning the battle system is challenging - not overwhelmingly so, but it can take trial and error in multiple encounters long after the tutorial fights are over. There are many considerations you must keep in mind when fighting to be successful, including your opponent's level, fighting style, and more. The game also features an equipment system and skill upgrade system much like many other RPGs, though this doesn't offer any truly novel mechanics - unlike the imaginary chain system.

The imaginary chain is the most intriguing aspect of combat: as if plucked straight from a music sheet, at the top of the screen is a horizontal three-tiered bar, and a vertical bar that progresses across it. The actions you choose to take in battle are plotted on the horizontal bar - again, not unlike notes on a piece of sheet music. Before you make your move, you'll see a shadow fight - a glimpse of a possible outcome given your selections - allowing you to see how your move combinations may unfold and whether you could have successful combos; unfortunately, there is still a somewhat frustrating element of randomisation to every exchange that can lay waste to your carefully built chain. It's an exceedingly complex system that some players will no doubt find themselves unable to fully master. Additionally, once the novelty of the system wears off, some battles start to drag; there are a huge number of encounters throughout the game, and battles become far too long and involved for the frequency with which they occur. 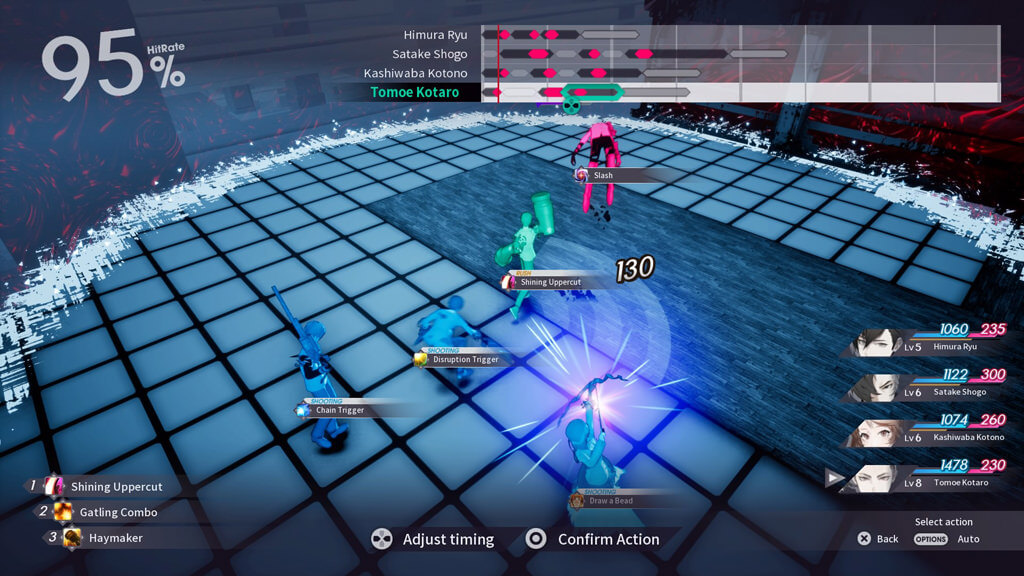 You shouldn't have a JRPG without a system for developing relationships between characters, and The Caligula Effect: Overdose doesn't disappoint in this regard, though it doesn't reinvent the system in any new or exciting ways either. You have the option to befriend any of the students you meet in the school, and once you create a friendship you can accept a quest from that student, which can lead to a variety of outcomes. There are a huge number of these quests, creating a huge amount of extra content for players looking to take the long route to finishing the game. The average time to finish this game will likely be around 40 hours for most players without completing any extras, and much more if you're aiming for completion.

The highlight of the game - perhaps unsurprisingly, given its nature - is the soundtrack. Each of the Ostinato Musicians have their own unique music, carefully crafted to match their personalities. Good music always elevates a game, and it certainly boosts the quality of this one. Visually, though, the graphics are just fine; it's attractively colourful, but textures can seem a bit flat on occasion, and the hallways you're required to manoeuvre to reach target areas start to feel repetitive. Playing on the Switch version in handheld mode, though the visuals have taken a bit of a hit, the portability the system offers is undoubtedly a great match for games like this that require a larger time investment.

The Caligula Effect: Overdose is a great effort that almost comes together to become a truly great game. It's held back mostly by its repetitive landscapes, long and drawn-out battles, and the fact that it spreads itself just a tad too thin by implementing a huge friendship quest system without focusing enough on main character development early on. The game does boast some incredible strengths, though, including a strong plot and an outstanding customized soundtracks for each Ostinato Musician. All in all, The Caligula Effect: Overdose is an impressive JRPG, and a great fit for completionists and lovers of vocaloid culture.