Review: My Time at Portia

Live a carefree life in this idyllic and engrossing life sim. If you keep up with news about PC games, there's a chance you might have heard of My Time at Portia before it was ever announced for a console release. Originally introduced on Kickstarter in late 2017, the charming crafting sim by Chinese developer Pathea Games has been available through Steam's Early Access for quite some time, with the final product launching in January 2019. Following success on PC, and following Pathea's team-up with renowned publisher Team17, My Time at Portia has made its way to consoles, and the result is a highly enjoyable - if flawed - gaming experience.

My Time at Portia is set in a refreshingly peaceful post-apocalyptic world in which you take over the running of your father's old workshop, situated in the city of Portia.  Over time, you'll be able to expand your workshop and craft a plethora of items and useful equipment, while also getting to know the city's residents and forging new relationships with them. There's plenty to do while you're not working or making friends as well, such as exploring old ruins and gathering materials - and for the most part, you can do it all at your own pace.

With that in mind, it'll come as no surprise that one of the series that developer Pathea Games credits with inspiring My Time at Portia is Animal Crossing. Much like Nintendo's much adored town management sim, there's no ultimate goal here; while there's certainly a base requirement to make use of your workshop and make an income, you can otherwise approach the game from a number of different angles. If you want to spend your time building relationships with Portia's residents - something that comes with its own benefits, which we'll discuss later - you have the freedom to do that. If you'd rather gather masses of materials to craft a bunch of items and sell them on the market, go right ahead and make your money.

Everything starts with the collection of resources such as wood, stone, sand, and various ores - all of which can be used to create different types of machinery, which in turn can be used to craft even more useful items. Each item's description also states where it can be found or which machinery can be used to make it, which is really useful when you want to top up on a certain resource. This is particularly handy when you start taking on commissions from the city's Commerce Guild, as these are posted by residents in need of particular items and will grant you experience, money, and a boost to your relationship with that person.

Commissions are one of the few time-limited aspects of the game, usually giving you five or ten in-game days to complete and deliver the items. Each day in Portia starts at 7am and ends when you go to bed, or at 3am at the latest, and each year is comprised of four 28-day months representing each season. Though the quick pace of days can feel a little pressuring at first, it's important to recognise that aside from the aforementioned commissions, the vast majority of tasks have no time limit, and you have a fair amount of freedom to do whatever you like. There are no penalties for not completing commissions or anything like that, so if you feel like spending a good few days gathering resources or mining for ores in the abandoned ruins, you have the freedom to do just that.

In terms of your ability to build relationships with the residents of Portia, which we mentioned earlier, this is measured through the game's social menu. By talking to each of Portia's residents on a daily basis, and by sharing gifts with them and helping them with quests, you can improve your personal relationship with each person. By becoming close enough to someone, you'll receive relationship perks, which can range from shopping discounts to stat increase and random gifts. Everyone in the town starts off as a stranger, but by building those relationships, you can become good friends with residents, or even partner with someone, potentially leading up to marriage. There are good and bad points to the system; relationship perks are a great incentive to spend time with people, but quite a few of the game's supporting characters are quite forgettable, so you might end up deciding that it just isn't worth it despite the perks.

The pressure-free pacing of My Time at Portia ties very neatly in with the game's lack of difficulty, insomuch that its challenge lies in learning about what's on offer in terms of crafting items, collecting resources, managing your own routine, and building relationships - all of which creates an experience that's often very easy to enjoy and takes the stress out of life. It also features an enjoyable soundtrack that's easy to listen to, although the apparent lack of any voice acting may seem strange to some, particularly given that it's present in the PC version. Portia's vibrant and somewhat unique visual style also fits its tone and theme well, especially paired with the absence of any doom and gloom despite the post-apocalyptic setting.

Not everything about the game is quite so enjoyable, however. There's a general lack of polish throughout, with spelling and grammatical errors appearing throughout, and some slightly confusing menus that could be better adapted for use with a controller rather than the PC version's preferred keyboard and mouse. The game's limited combat could also have been much improved upon, since defeating monsters essentially means hitting them over and over until their health drops to zero, though they'll also fight back, and some more aggressive enemies will attack you on sight. Another odd one is stamina, which effectively limits how much you can do in a day, since tasks like cutting down trees and picking up resources deplete your stamina gauge - while things like sprinting and rolling, which you would expect to do the same, are instead measured by a different, auto-renewing gauge. It's a slightly strangely implemented system. It's also hard not to feel as though there are missed opportunity within the game's narrative, such as while the conflicting beliefs of the city's church and research centre with regards to old-world relics - a potential plot point that would have been interesting to explore in more detail.

Overall, though, My Time at Portia is easy to immerse yourself in for hours on end. Despite its issues - and despite the fact that the console release would have been the perfect opportunity to fix them and add some more polish - the game remains a highly enjoyable experience, particularly when wanting to unwind or de-stress. It's a great fit for anyone who wants to sink hours into it, as well as for anyone just wanting to play a couple of in-game days at a time, which is made possible by the way in which the game's difficulty and pacing have been managed. If you can see past Portia's flaws, there's very little that's likely to stop you from enjoying this impressive experience. 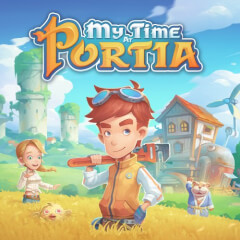 My Time at Portia