Mario + Rabbids Kingdom Battle was the crossover event of the year from Ubisoft and Nintendo that no one knew they wanted, until the sight of Rabbid Peach shooting honey at a mutated Piranha Plant before taking a selfie with it changed everyone's minds. The incredibly creative and fresh title boosted the Switch's third-party game library immensely, so news of a full Donkey Kong expansion was cause for celebration for many of the game's fans. I found this expansion to have very high production value; visually, it doesn't miss a beat, providing the fun and crazy 3D comic book-like visuals that work so well in the base game. Additionally, the new story mode is impressively long, with a completion time of roughly 10 hours; in fact, depending on how many puzzles you choose to solve on your way through the story and your personal need to obtain a "perfect" completion rating, the new campaign is almost half as long as the base game.

Your new adventure begins with the abominable Rabbid Kong running amok once again, as some random Rabbids with rather fetching Sherlock-inspired Deerstalkers encourage him to mess with the magical Time Washing Machine. This leads to a rather unfortunate electrical shock, enraging Rabbid Kong into delivering a punch that causes the machine to begin sucking in everything nearby - including Rabbid King, Beep-O, and innocent bystander Rabbid Peach. Coming to on a beach, the trio join up with Cranky Kongto and begins their journey to recover the broken and missing Time Washing Machine parts.

The quality of the animation and emphasis on facial expressions in this expansion cannot be understated. Cutscenes appear carefully crafted and thoughtfully planned, and every interaction between characters is fun. The dramatic exchanges and faces pulled by Rabbid Peach are a highlight of my year and resulted in genuine snorts of laughter. The only slight letdown is the lack of focus on Donkey Kong in character development and interactions; the game doubles down on Cranky Kong, and while he's entertaining, more attention on Donkey Kong would have been much appreciated.

Gameplay in the expansion is consistent with the core game, which is great because there really wasn't much to improve on. The core game consists of a combination of exploration and tactical turn-based battles, and that formula has been repeated, with turn-based battles significantly outweighing the exploration element this time around. Donkey Kong Adventure is an entirely single-player campaign, and if I could add only one thing it would likely be the ability to play a co-op campaign; it certainly wasn't something I was expecting, but it would be a novel kind of fun to progress through with a friend, either online or locally. 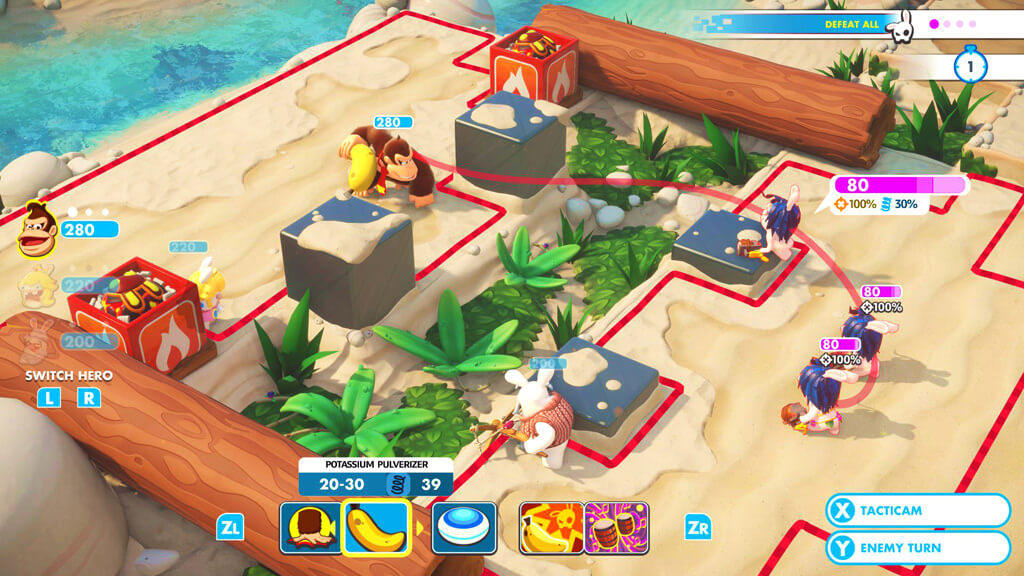 The expansion is split into four chapters set in visually diverse environments, each as striking and unique as the worlds we were gifted with in the core game, with Spooky Trails being my favourite. The difficulty level of the campaign is quite low, especially for those with experience of the core game, and Ubisoft's inspired interface for Donkey Kong Adventure prevents story-mode playthrough until a certain portion of the core game has been completed. This is a good move, because the expansion throws you immediately into battles that require knowledge of strengths, weaknesses, primary and secondary weapons, and abilities to emerge victorious. That being said, my preference would have been for an even higher level of difficulty in the expansion, since the developers chose to completely forgo a tutorial and prevent new players from jumping in.

For all the funny and imaginative visuals this game delivers, it delivers equally on a deeply engaging turn-based tactical experience. The only playable characters in the expansion are Rabbid Peach, Donkey Kong, and Cranky Kong, but they each receive an entirely new set of weapons, abilities, and skill tree options. Donkey Kong introduces the ability to pick up items, team-mates, or enemies on the battlefield and throw them a considerable distance, inflicting extra damage on enemies or positioning an ally for a previously out-of-reach shot. This introduces limitless new tactics to think up, though at times feels overpowered and can decrease the difficulty of the battle; jump pads for DK to use are also introduced, and often seem to have the same effect. These new inclusions are creative, but an option to increase the overall difficulty would have been welcome for expert-level players looking for a more challenging scenario.

Each of your team members can once again wield a primary and secondary weapon and receive skill tickets from successful battles, which will allow you to upgrade certain skills and abilities as well customize the character to your gameplay style. The available weapons are fantastically designed, and whoever named these weapons has a commanding use of both the English language and hilariously terrible puns. Different weapons grant different benefits against specific enemies - for example, some weapons deal more damage to Bucklers or to Summoners - and can inflict different special effects like ink, push, or honey damage. The ticket-based skill tree system is the same as in the core game and offers a plethora of options to upgrade your character to best match your play style.

Overall, Ubisoft has done a great job with this expansion, giving fans a very robust experience. The game loses none of the charm it possessed initially; in fact, I personally feel the interactions between Rabbid Kong and Rabbid Peach are even more entertaining than many of those from the core game. The inclusion of Donkey Kong and his themed environments has been accomplished spectacularly by fantastic use of the visuals and soundtrack, and Donkey Kong's new abilities allow for novel tactics and new spins on the old battle progressions. Ubisoft has found great success in Mario + Rabbids Kingdom Battle, and again in its expansion.

▲ Addition of fun new characters, weapons, and battle tactics
▲ Hilarious character interactions and dialogue
▼ Not much development or focus on Donkey Kong 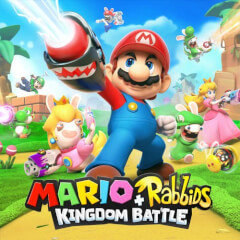