Could lucky number seven be the best of the bunch? 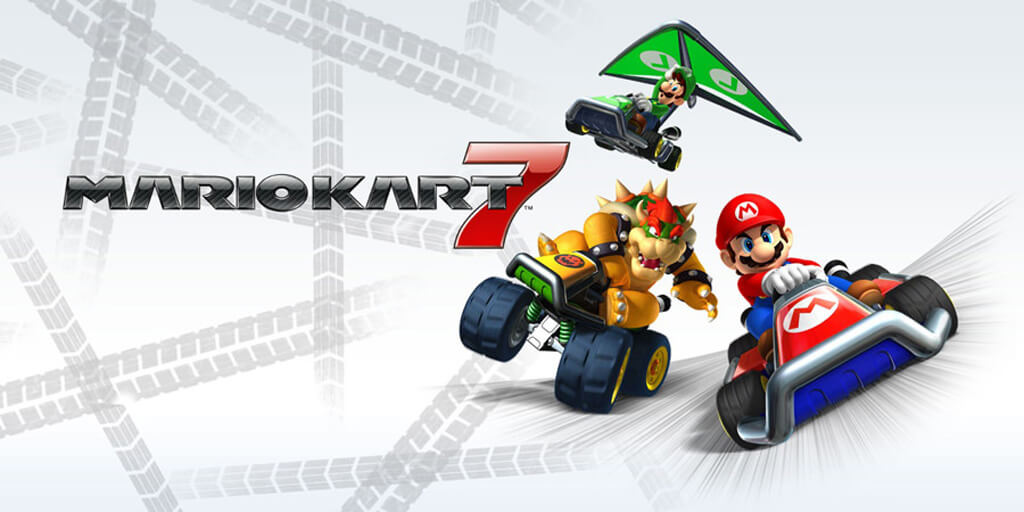 Here's a scary fact: Mario Kart has been around for twenty years. Super Mario Kart launched in Japan in 1992 and has since spawned six main sequels. For some people, the surprise might be that there have been seven already; for others, that there haven't been more given the series' lifespan. It's no surprise, however, that Mario Kart 7 is one of the freshest new games the series has ever seen as well as one of its finest titles.

It took a year for Nintendo to reveal any information about Mario Kart 7: unlike its showing at E3 2010, its appearance at E3 2011 bore actual gameplay details and it was immediately clear that Nintendo had taken the game in a different direction. The biggest new feature revealed was the new gliding and underwater sections, while it was also revealed that karts would be made of three different parts - chassis, wheels and glider - which were completely customisable by players. It was exciting because of the possibilities it would bring in races: each choice would create a kart with its own unique stats, resulting in a greater take on Mario Kart Wii's base vehicle stats.

The core aspects of the modern Mario Kart series remain: Mario Kart 7 once again features sixteen new tracks and sixteen classic tracks, unlockable characters and vehicle parts, and a number of different online modes including eight-player racing. The game brings a number of new features to the table, including the aforementioned gliding and underwater sections in some tracks, as well as the ability to switch to a first-person mode at any time and control the game using the system's gyro sensor, though this control method can be turned off at any time. It takes a little while to get used to first-person mode, but it's a nice addition to the game and, much like everything else in the game, it looks pretty fantastic too.

Between gliding and underwater karting, gliding is unquestionably the better of the two by a long shot. We're not saying the underwater sections are bad, because they're not: the ability to drive underwater and not be slowed down opens up a number of opportunities on certain tracks and it's interesting to see how karts handle slightly differently underwater. Gliding is a better addition because you're able to control exactly where you take your kart and where you land back on the ground, while it also opens up the opportunity for some very nifty shortcuts.

Eleven of the game's sixteen classic tracks are from Mario Kart 64, Mario Kart DS and Mario Kart Wii, with the rest of the series seemingly overlooked: the Super Nintendo, Game Boy Advance and GameCube games only have one or two tracks featured each. The Wii and DS games are represented by four tracks each: this seems a tad too many considering they're the latest games in the series, moreso when you consider the picks aren't that brilliant (Coconut Mall? Really?). That said, there are some fantastic picks - our favourites being Waluigi Pinball, Kalimari Desert and Dino Dino Jungle - but some tracks which would have been perfect have missed out. Can you imagine Mario Kart 64's Royal Raceway with a gliding and underwater sections?

Naturally, many of Mario Kart 7's new tracks have been designed with gliding and underwater karting in mind, as they all feature one or the other of the two new features. They're not obvious or in-your-face, though, as in a number of cases they're used as alternate routes or shortcuts. It's hard to fault any of these new tracks, since they're all impressive, well-designed and a lot of fun to race on. Tracks like Melody Motorway and Koopa City are some of the best tracks ever seen in Mario Kart, while Bowser's Castle and Rainbow Road are among the very toughest.

Another of Mario Kart 7's high points is that, no doubt thanks in part to the precision of the Circle Pad, it controls like a dream. Corners are a piece of cake, no matter how tight, since you're able to drift and gain mini-turbos using the R button. Even if your kart doesn't handle the way you want it to, you can change the chassis and wheels to better suit your driving style. If you're not keen on drifting with the R button, for example - as some beginners might not be right away - you can pick a set of wheels that let you corner easily without the need to drift. There's a setup to suit everyone and this is one of the many great things about the game.

Online functionality also plays a large part in the game's multiplayer modes. As with Mario Kart DS and Mario Kart Wii, Mario Kart 7 features a number of different online multiplayer modes playable over the new Nintendo Network service, including the ability to enter an eight-player online race or battle. You have the option to race against your friends or opponents you've raced against before, thanks to a menu which shows you who's currently online. You can also set up and join Communities in which you can set up various rules, such as the engine CC or items to be used. In Communities, each member will have their own score, and on the selection screen the current members in first, second and third places will be shown.

In terms of online play, this is as far as Mario Kart 7 goes - despite being a big leap forward in terms of Communities -  but that's for the best. While Mario Kart Wii did allow more with its own Mario Kart Channel, such as competitions and time trial rankings, these were open to cheaters, meaning top-ten lists were often filled with so-called racers who had managed to "complete" a race in under a second. While the 3DS instalment does have a Mario Kart Channel, it's not one that can be installed on the Nintendo 3DS Home Menu (which is kind of a shame): it's used to amend your player settings for online play as well as display time trial data received over SpotPass and StreetPass. Four new SpotPass time trials are received every day, with each of the eight grands prix being covered in an eight-day period this way.

Mario Kart 7 is one of the most exciting titles in the Mario Kart series. It's vibrant, innovative, fast-paced and the most fun you'll have on the Nintendo 3DS. Online play is seamless and the new Community feature adds a new level of interest previously unseen in Mario Kart. The difficulty level is spot-on, with the computer-controlled characters getting gradually tougher the more advanced a racer you become. You'll replay it over and over again to unlock everything and get the perfect three-star score on every grand prix and, because it's fun, it'll never get tiring. Racing really doesn't get any better than this.