Review: Mario and Donkey Kong: Minis on the Move

Mario and company are back with even more puzzles to keep the Minis occupied. 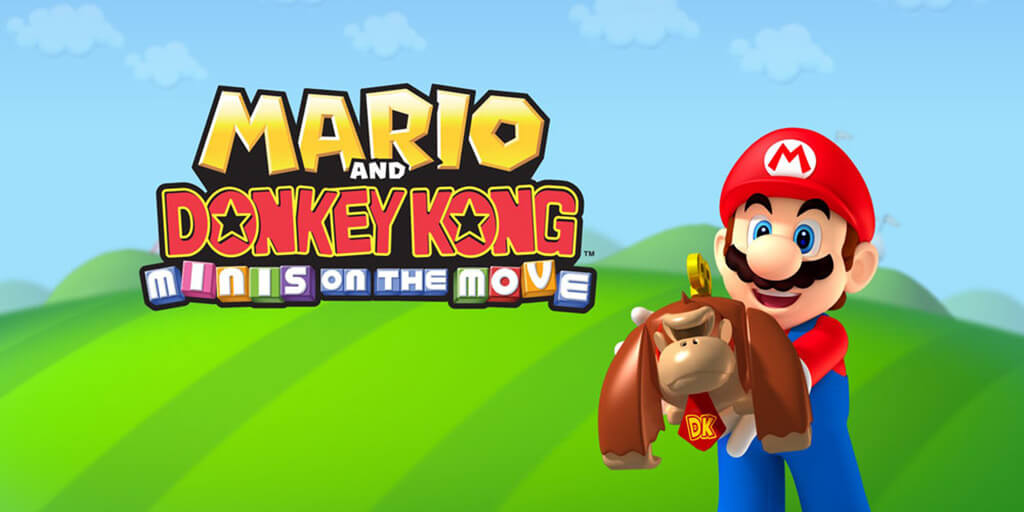 Mario and Donkey Kong have always had a strong rivalry. It seems the two have been chasing one another since before time began, though it's a little more one-sided when you consider that Mario usually does most of the chasing. The pair took to throwing puzzles at each other (metaphorically, at least) in the Game Boy classic Donkey Kong, but it took some time before the series returned - Mario vs. Donkey Kong launched for the Game Boy Advance in 2004 and spawned three sequels, each of which followed the same general rule: Mario good, Donkey Kong bad, lots of puzzles.

This time, Mario and Donkey Kong have teamed up and are running two parts of the same shebang - Mario is running the Mini Toy Carnival, in which he offers up more than 170 different puzzles, while Donkey Kong and Pauline are on hand to provide a number of different minigames as asides of the main event. In terms of your progression through the game, the fact that nobody's being held to ransom makes no difference; in reality, the sense of progression is much less this time around because you'll unlock multiple puzzles at once, but we doubt many people play Mario vs. Donkey Kong games for progression or the story anyway.

There are four types of puzzle, each of which offers up a different experience with varying difficulty levels. The main attraction is Mario's Main Event, a series of 60 puzzles in which you need to fill a path with falling tiles to lead the Mini the right way to the goal; these start off fairly easy and you'll have little trouble collecting the three "M" medals on the way to the goal, but later on you'll care less about the medals and more about just getting to the end. A number of different gimmicks present themselves throughout, such as rotating panels, enemies and warp pipes, so you'll need to remember how each panel works while working your way through - and all with a time limit as well.

The second attraction, Puzzle Palace, seems relatively easy, though the aforementioned gimmicks appear much sooner. In this, you're given the panels you need to get the Mini to the goal at the very start, so you just need to fill the board in. Your third option is Many Mini Mayhem, which is a fair bit more difficult because not only do you need to move panels around the board, you have multiple Minis to keep an eye on and lead to the goal. The final, and most difficult, attraction is Giant Jungle, which offers three massive boards with many challenges. While you're busy placing panels on the board to keep the Mini moving, you also have ten stars to collect before getting to the goal - and you also need to collect clocks to keep your time limit from reaching zero.

In our opinion, one of the great things about the Mario vs. Donkey Kong series is how different each entry is from the last. With the possible exception of March of the Minis and Minis March Again!, which were somewhat similar due to the latter effectively being a DSiWare remodel of the former, every title has brought something different to the field, and that's one of the reasons each title has been worth the investment. Minis on the Move is a very different kind of game, possibly taking the series through its biggest change yet, but it does a good job of allowing each attraction to retain its own style. The way mechanics are used in different ways in each attraction is clever, as it guarantees that in most cases, even though you know what a certain panel or item does, it might take a few goes for you to ascertain exactly how to use it in a new environment.

Of course, multiple mechanics with multiple uses - in multiple different types of puzzle, no less - can make for a very challenging experience. This can be weighed up as a positive or a negative depending on your ability: if you've enjoyed and completed Mario vs. Donkey Kong games before, you'll find Minis on the Move provides an excellent challenge; however, if you've never gotten to the end of one before due to it being that bit too difficult, don't expect to finish this one any time soon. It's probably better to focus on one attraction at a time, since that should help hone your skills - and try to keep in mind that you don't have to collect anything on your way to the goal, except for keys in certain levels. Making for the exit as quickly as possible is often the best thing to do if you're getting frustrated with a certain level.

If you're after a diversion for a little while, Minis on the Move provides you with four minigames, each of which provides a different experience, or at least tries to. Two of the games, Mini Target Smash and Cube Crash, are fairly similar in that both require you to catapult Minis into targets in the former and into giant cubes in the latter. You can either risk taking a little more time to line up your aim, or you can fling to your heart's desire in the hope that you'll eventually hit something - both a bit hit-and-miss at times (pun intended), but Cube Crash is good fun. Fly Guy Grab is similar in a way, as you need to throw a line out to catch Fly Guys, but once you've caught them you need to reel them in by drawing circles on the touch screen as quickly as possible. The last game, Elevation Station, requires you to move a Mini up and down on a platform to collect coins and avoid Bullet Bills; this is probably the most satisfying game, as its ease of control is coupled with a challenging experience over three lengthy levels.

Fans of level editors have also been provided with a tool called Create & Share, which allows you to create and customise your own levels to share with others. The tool allows you to use many of the mechanics you'll find in the main game, such as warp pipes and floating items, but it has one unavoidable downfall: you're unable to determine the order of panels that fall into the pipe to be used on the board. In the main puzzles, the game often gives you the panels you'd most likely need sooner or later, but in Create & Share, all you can do is determine how often each type of panel appears, meaning you could still be left in a panic very early on. It's still a good tool which can provide a lot of fun if you can learn to manage the random panels, but unfortunately it doesn't offer the enjoyment of some of the series' previous level editors, Mini-Land Mayhem! in particular having an excellent editor.

As the newest puzzler on the block, Mario and Donkey Kong: Minis on the Move does a great job of providing a puzzle experience with a formula that hasn't really been tried before. Having a number of different types of puzzle in one package, all of which have had a great deal of effort put into them, makes this worth the investment for anyone who enjoys difficult puzzles, and the fact that each type of puzzle is somehow similar to the others will help players make good progress. It might not be the best game in the series - we'd wager that accolade goes to Mini-Land Mayhem!, the previous entry - but it still offers one of the better experiences to come out of Nintendo eShop as far as puzzlers are concerned. It might not be the best starting point for beginners, but those who are skilled in the ways of the puzzle or who have enjoyed previous Mario vs. Donkey Kong games will no doubt love this just as much.

Mario and Donkey Kong: Minis on the Move