Don't let the multitude of ghosts spook you away from this one - this frighteningly good game deserves your full attention. 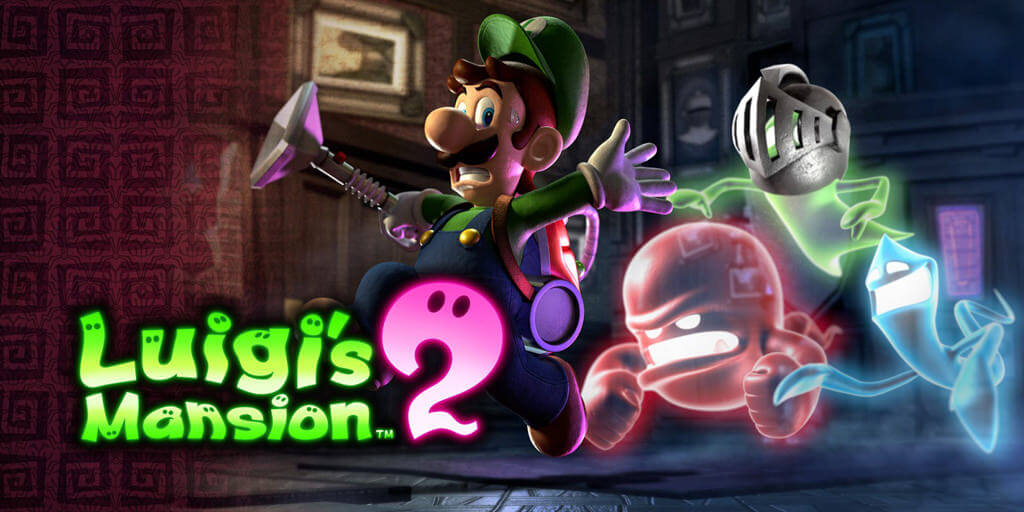 Back in 2001, when Luigi's Mansion originally launched alongside the Nintendo GameCube in Japan, its unique gameplay and lovable - if easily spooked - hero immediately gained it a considerable fanbase. It was so loved, in fact, that it didn't take long for rumours of a potential sequel to start popping up, albeit less because of hints from Nintendo and more down to the original game's popularity. These rumours gained considerable speed when it was revealed shortly after the Nintendo 3DS launched that Luigi's Mansion was originally created as a 3D title, a technology that GameCube could have used were it less expensive at the time. Fast-forward to March 2013 - more than a year later than originally planned - and Luigi's Mansion 2 has finally arrived. It's fair to say that it's been well worth the wait.

At the beginning of Luigi's Mansion 2, Professor E. Gadd is keeping busy in his laboratory, aided by the friendly ghosts of the game's setting, Evershade Valley. Unbeknown to them, a not-so-mysterious figure in the sky destroys the Dark Moon, which hovers over the valley, keeping all the ghosts in check. Its destruction, which sees it scattered in numerous pieces, turns all the ghosts hostile, forcing Gadd out of his lab. Cut to a quieter scene - Luigi nodding off in his favourite armchair - and Gadd suddenly turns up in his television screen, forcibly volunteering Luigi to aid with the mighty problem Evershade Valley now faces.

Luigi has two main targets in the game: first and foremost, his aim is to retrieve the missing pieces of the Dark Moon, thus returning the ghosts to normal and ridding Evershade Valley of the thick fog that now blankets it; to have any hope of doing that, however, he's also going to need to recapture all the hostile ghosts. In order to do that, the wacky professor has provided him the latest in ghost-capturing technology: a torch with a strobe light, allowing Luigi to stun ghosts, and the Poltergust 5000, which is used to vacuum up the ghosts once they've been stunned. Also available shortly into the game is the Dark-Light Device, which allows Luigi to use the torch to "see" items that have been hidden by ghosts, as well as some of the ghosts themselves, making it a key component of his inventory.

Nintendo and Next Level Games have clearly worked to ensure the game's controls are better than those of Luigi's Mansion, which could be complicated at times, mainly because multiple buttons or both control sticks were often needed to catch ghosts. Luigi's Mansion 2 simplifies the matter somewhat: instead of having to quickly turn to flash your light on ghosts, all you need to do is stun them using the torch's strobe light, then hold the R button to vacuum while pulling the Circle Pad in the opposite direction to the ghost. Luigi also manages to keep his feet on the ground a bit more than he did before, which certainly helps matters. The game also does a good job of letting you know when to press what: it isn't condescending like it could have been, nor does it leave you helpless. Button reminders are shown on the screen if you can do something; for example, the X button appears on screen to open a door or peek through a hole.

Luigi's Mansion 2 differs to its prequel in that multiple mansions are included, each featuring a number of different missions for players to complete. While the original game only included one mansion, its story was split into several parts - players had to collect keys from boss ghosts to open up large new sections of the mansion - and this new setup is reminiscent of that as Luigi's starting point may vary by mission, as will the rooms accessible to him. As soon as Luigi's mission is complete, E. Gadd will bring him back to his lab by pixelshifting him - literally pulling him back, pixel by pixel - for a summary of the mission's success and a briefing on the next mission to be carried out.

This doesn't mean there's less to explore, however; if anything, thanks to the way the mansions have been so cleverly designed, there's a lot more to seek out in each mission. There are a lot of hidden crevices to find and plenty of furniture to be played with, and because Luigi doesn't stay in a mansion once a mission's been completed, things can - and often do - move around quite a bit. Much of this is the gold Luigi collects - coins worth 1G, notes worth 5G and gold bars worth 20G - and often you'll find a stack of gold tucked away in one mission, only to return in the future to find nothing but dust bunnies. Often you'll find something hidden away midway through a particular mansion that you'll want to check out in previous missions to see what's there - this is the joy of these mansions' designs, and of course you're able to replay any mission you've previously completed.

Once you complete a mission, you'll be given a rating of one, two or three stars depending on how well you did. This rating is based on the time taken to complete the mission, the number of ghosts captured, the amount of damage taken and the amount of gold collected. The game will keep a record of your best results in these categories, so you can see how you improved at the end of each mission, which could give you a good idea of how best to get a better rating for it. Completing a mission will also open up the next mission, though at no point are you required to move straight ahead - there are always opportunities to return to older missions to improve your rating, collect more gold or find more special gems, of which there are thirteen in each mansion.

In the original Luigi's Mansion, Luigi was aided by a modded Game Boy Color called the Game Boy Horror, which showed him a map of the mansion and a quick glimpse of the gold he'd collected. This time around, his trusty handheld is an original style Nintendo DS - quickly dubbed the Dual Scream by Gadd - which, as a nice little parallel of the Nintendo 3DS, does very much the same as the Game Boy Horror, but better. The touch screen displays an interactive map of the mansion, allowing you to switch between floors and see which rooms need your attention. You're also able to view a list of tasks and check which rooms those tasks need you to go to. The touch screen also displays a summary of your health, the gold you've collected, other items you've obtained and some specific tasks you need to complete.

Once you know the original Luigi's Mansion was created with 3D technology, it becomes immediately clear how impressive it could look on Nintendo 3DS and how useful it could be. It should come as no surprise that, no matter how strong the 3D is or whether it's turned off altogether, Luigi's Mansion 2 is, visually, incredibly impressive, and with the 3D turned on it becomes a lot easier to gauge where items and ghosts are situated within rooms. 3D really does add a wonderful sense of depth to the game, whether it's turned up high or at around mid-strength, and the game's visuals remain stunning even when 3D is turned off. The fantastic visuals go hand-in-hand with a bit of visual trickery in some of the mansions, purely because it's difficult to doubt what you see in front of you when it looks as good as this.

When you find yourself needing time away from the single-player mode, Luigi's Mansion 2 also includes enjoyable multiplayer modes based in a special mansion called the Thrill Tower. Here, up to four players can cooperate (though most will end up competing with each other) to make their way through the Thrill Tower in a variety of different modes. Players can choose between five, ten or twenty-five floors in a game and can also set the difficulty level for the game as well. In the Hunter Mode, players will need to catch all the ghosts on a floor before they can move onto the next floor, while other available modes include Rush Mode and Polterpup Mode, both of which are also good fun. All types of play are supported: online play with friends or other players from all over the world; local play with up to four players, all with a copy of the game; or a limited version using download play, in which case only one player needs the game.

It's been a long wait for this game; the ten years between Luigi's Mansion launching and Luigi's Mansion 2 being announced seem to have flown by in comparison to the twenty-one long months between Luigi's Mansion 2 being announced and released. Nintendo and Next Level Games have delivered with a wonderful experience on Nintendo 3DS: Luigi's latest adventure is one of his greatest, with plenty of replay value, a satisfying difficulty curve, a great soundtrack, excellent visuals, and a dash of humour to boot. Whether you're a fan of the series or a newcomer who never experienced the original, you'll instantly find yourself warming to Luigi's Mansion 2, which provides the sort of unique experience we've come to expect from Nintendo. A perfect start to the year for Nintendo 3DS, a perfect start to the Year of Luigi, and, well… maybe give it a couple of years before starting the Luigi's Mansion 3 rumours, eh?