Lapis x Labyrinth is a brilliant light show that accomplishes everything you could possible want from a crazy dungeon-crawler.

As such a fan of video games, I watch a lot of gameplay trailers, which can make it increasingly difficult for some games to stand out to me. Lapis x Labyrinth (simply pronounced "Lapis Labyrinth") exploded into my life as an indie title featured on the Kinda Funny Games Showcase last year, and the sheer scope of the colours and treasure explosions on the screen had me rewinding the trailer and playing it over and over to get a better look at the beautiful backgrounds, weird stacking of your party members, and the insane chaos of jewels all over the screen. I wasn't sure what to expect with this title, except that it would be visually appealing; after a few weeks with the game, however, Lapis x Labyrinth has revealed itself as a wonderfully mindless dungeon crawler with some of the best aesthetics and most satisfying gameplay features I have experienced in a long time.

Some indie side-scrolling games pride themselves on depth and quality of storytelling, but Lapis x Labyrinth is not one of these games. Its fun but shallow plot begins in a small town that has all but lost every single soldier from a once bustling adventurer hub. When your character shows up it thrills the town's leader, who decides you could be just what they need to bring attention back to their small community and the excitement the labyrinth offers those willing to enter it.

Lapis x Labyrinth is a dungeon crawler and the dungeon in question is called the labyrinth; there are numerous iterations of the labyrinth with different map layouts, a variety of enemies, and gorgeous colourful backgrounds. Each map requires you to navigate your way through the maze until you reach the final warp point; this is considered the exit point of each map and triggers the completion animation which lets you know your scores, completion rating, and any drops you might have acquired, which come in the form of chests of varying rarity. Lapis x Labyrinth also features a gear system made up on random drops from chests you trade treasure for; I wasn't super fond of this system, which appears to be completely random, as even selecting a higher-quality chest to open would often result in an unusable piece of gear due to poor stats. The loot system would benefit from being a little less random - perhaps include some gear that could be crafted? - and for the rarity and quality of loot to scale a little better as you progress through the game.

You can easily spend any number of hours customizing the stats of your party members by combining different gear pieces; the game gives you multiple equip options per character. The main menu very conveniently includes a fast travel option to the character customization zone, which you can also manually travel to in the overworld, and the options layout in this zone is intuitive and efficient. The kind of gear available is very amusingly named, with high-level frying pans available for your Maid, or zany glasses for your Gunner. It would be great to see a patch in the future where characters' physical appearances changed based on the gear equipped.

The game does a good job giving a tutorial on how to progress through labyrinths, but it could have spent a little extra time introducing one of its most unique features: party stacking. Lapis x Labyrinth allows you to build your team from eight different character classes including berserkers, necromancers, gunners, and more. I personally enjoyed combining the gunner (fun double pistol mechanics), berserker (raw power), and priest (healing), while switching out the last of the four party spots to experience different character abilities. When picking party members, the game allows you to customize their appearance, limited to changes to hairstyle, eye shape, and voice acting. I did enjoy listening to different voices and then assigning very high or low voices in odd combinations (my squeaky Berserker, for example). While each class does offer unique weapon usage, you can't customize the appearance of weapons, since their appearances are set for each class. The classes are fairly standard, and you have probably encountered them and their general skillsets in other games. What you likely have not encountered before - unless you've played Disgaea, another Nippon Ichi Software favourite - is your heroes sitting on top of each other's heads and executing their attacks in a stack. It works exactly how it sounds, and its quirky novelty was incredibly fun. You can easily cycle through party members to have a different class take over the head role on the bottom, and there's even a heart-breaking animation when one of your party is killed.

There are no complicated battle mechanics in this game, since these essentially boil down to button-mashing once you've seen an enemy to hit it until it's defeated. While that might be considered a slight oversimplification - you can also trigger special abilities and team attacks - the system feels like a fairly mindless approach overall. Destroying enemies nets you coveted treasure, and the more treasure you collect, the more frequently you trigger Fever Mode; and if you thought navigating through the labyrinth seemed chaotic enough already, wait until you're introduced to Fever Mode. This bonus mode makes it possible to gain gems for hitting inanimate blocks as well as enemies, allowing you to accumulate massive amounts of treasure and boost your treasure point score. For the entirety of the time the mode is engaged, your screen will be filled with gems bursting out of every surface and in every direction. It is incredibly satisfying and reminded me a lot of the gratifying feeling Super Mario Bros. 2 would give me when I'd pick up items to lob at enemies.

Experienced players and speed-runners can likely complete Lapis x Labyrinth in under 10 hours; if you enjoy taking games at a slower pace, you can expect to finish in 15 to 20 hours. It took me 18 hours to complete the game without obtaining all available collectibles. I tested this game on the Switch in both docked and handheld mode, and despite everything going on in the game it remained spectacular in both instances displaying no frame drops.

Lapis x Labyrinth is not a deep, nuanced gaming experience, and it doesn't need to be. This is not a serious game with serious consequences to your in-game choices, this is a light experience that can relax you and take your mind away from other things. It has accomplished something special by being just what it is; a beautifully rendered, well-paced adventure with wonderfully satisfying gameplay. 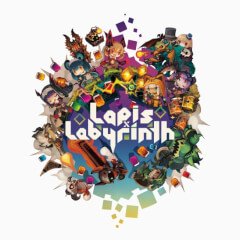