Return to Duckberg in an impressive remaster of a classic fan favourite. 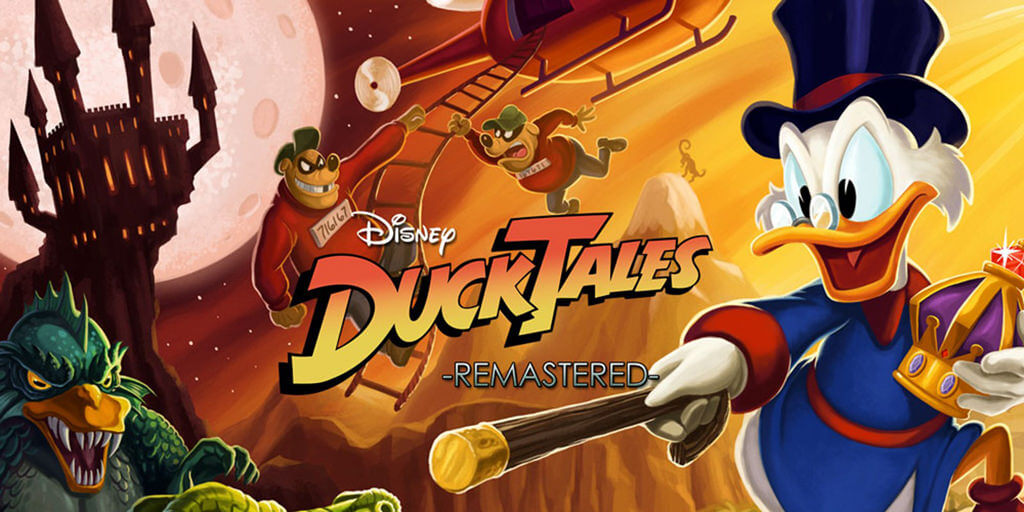 The name DuckTales is one known and loved by many, in part because of the popular cartoon series featuring Scrooge McDuck and his great-nephews Huey, Dewey and Louie, and in part because of the Capcom-published video games that followed. DuckTales was one of the most revered NES games, so much so that it was followed by a Game Boy version and an official sequel, DuckTales 2, which also launched for both Nintendo systems. Released in 1993, DuckTales 2 was the last retail release in the series until the present day and the November 2013 release of our focus today, DuckTales: Remastered.

DuckTales: Remastered centres around the filthy rich Scrooge McDuck, who, after almost being robbed by the infamous Beagle Boys, finds himself in possession of a painting which uncovers the locations of five incredibly rare - and extremely valuable - treasures. McDuck immediately makes plans to travel to the five locations depicted in the painting and find the treasures in an attempt to seal his legacy as the world's richest duck. Accompanied by various members of his family and staff - often against his own will - and piloted by the fairly incompetent Launchpad McQuack, McDuck makes for his goal, though it soon becomes clear there are others in the hunt for the treasures.

A side-scrolling platformer, DuckTales: Remastered features five main levels, each of which features the same objectives: collect as much treasure as possible throughout the level, before finding and beating the level's boss to obtain the area's great treasure. All the while, there are enemies and obstacles to avoid or defeat, and the treasure you find won't appear until you pass over it, so you'll need to actively search for it. Once you've passed a treasure's location, you'll be able to collect it; some treasure can be found in chests, and again, some chests will only appear once their position has been passed over.

The first time you play through the game, you'll be required to play through the levels in a specific order, as this lets you get used to the game's rising difficulty at a better pace. As the levels go on, they get slightly longer and a bit more involved; for example, you might be required to collect a certain item or group of items in order to pass a certain point. While this is arbitrary and serves no real long-term purpose, it does ensure you'll need to visit every part of the level, gaining you more treasure along the way and giving you the opportunity to find those hidden crevices with even more diamonds stowed away.

While the suggestion that the game's difficulty level rises at a steady pace is a fair one, that's not to say it's been tackled perfectly. Parts of some levels are exceedingly tough, and more often than not this is down to either a design flaw or a badly positioned enemy. While it's possible to defeat most enemies by bouncing them on the head or whacking them with the cane, some enemies - by which we mean snakes and ghosts, the latter of which are incredibly annoying - can't be defeated by Scrooge McDuck's hand (or cane) alone, which can be quite frustrating at times, especially since jumping over them is nothing more than a leap of faith most of the time. As well as that, while some parts of the game are too tough, you're likely to find other parts a little too easy, including one or two of the end-of-level boss battles.

For the most part, the game's levels are enjoyable and there's a decent amount of collecting to do. Treasure comes in the form of small diamonds worth $2,000, large diamonds worth $10,000, and red diamonds worth $50,000. Some diamonds are found within chests, which can be opened when hit with the pogo stick or a rock, but most are hidden from sight until their location is passed over, at which point they'll appear and fall to the ground. This means you're often doubling back to collect treasure that's just appeared, and it also means you'll spend most of your time bouncing around on the pogo stick, hoping you'll come across something of value at some point.

One of our biggest sticking points with the levels is the number of enemies that need to be dealt with. The issue is that any enemy which travels to the left, such as a flying enemy, will almost constantly come at you from the right side of the screen, meaning you'll have to dodge or defeat them continually. This is the case regardless of what else you need to deal with, such as other enemies moving between two points, and it can be a real pain at times. The fact that enemies don't drop anything doesn't help, as it makes defeating them seem like nothing more than an unfairly arduous task put in place to annoy you. It's something of a shame, because the enemy design is great, but the execution lets them down slightly.

In fact,  much of the game's design is impressive. The levels are very well set out and are only really let down by some poor enemy placement in places. Visually, the game stands up very well, from the high quality of the backgrounds to the vibrancy of the foregrounds and the hand-drawn sprites. The game is a good length as well, and though a single playthrough might not take you so long, there are some interesting items to unlock including concept art and audio clips. These are unlocked by "paying" for them with the money you collect in the game's levels, and once the credits have rolled for the first time, you can replay the levels as many times as you like and in any order, which is a nice way to provide some replayability.

Anyone who's feeling a little nostalgic for the original DuckTales will be pleased to hear that the original soundtrack has been remastered and fits the game just as well as before, with the added bonus that the original NES soundtrack can also be unlocked after beating the game. The original theme tune remains - as if it could ever be replaced - and many of the series' voice actors return, which means familiar voices and the occasional questionable accent. Still, the voice acting and soundtrack are both of a good standard overall, the only grating noise being the jarring "boing" of the pogo stick.

One of the most impressive aspects of DuckTales: Remastered is its ability to feel brand new while still holding onto a legacy. The team at WayForward have done a great job of creating a game that is visually impressive and fun to play, though it's a real shame that little things like the enemies, who suffer poor placement and unpolished mechanics, can cause frustration where it really isn't necessary. Despite that, the game is a great deal of fun to play, and the first of what we hope could be more remasters from Capcom and its favoured friends. If you're after a good amount of bang for your buck (or your McDuck), you'll certainly find it here.