Remakes of fondly remembered and positively received classics are a risky business; in the right hands, you can bring a timeless piece back to life for a new generation, but get it wrong and there's almost certainly going to be hell to pay. The coin could have fallen on either side with Crash Team Racing Nitro-Fueled, a remake of the 1999 PlayStation title Crash Team Racing, loved by many but still with its fair share of detractors. Fortunately, with Beenox at the helm, Nitro-Fueled accomplishes what so few remakes do: it surpasses the original in almost every way.

This game stars the usual suspects in the Crash Bandicoot crew, including favourites such as Crash, Tiny, Coco, and many more. The planet is threatened by an alien deity who has decided he wants to destroy their home, but he will leave their world alone if they are able to defeat him in a race. This is your starting point in Nitro-Fueled, launching you into the main menu to decide how you want to play. If you're looking for a deep and engaging story, I would encourage you to keep looking; however, if you're after an incredibly engaging and occasionally frustrating cart racing experience, this is the one you've been looking for.

There is a huge amount of content in CTR Nitro-Fueled, and more to come with the announced DLC plans and Grand Prix content. Out of the box, the game includes a number of different modes which allow you to play the game any way you prefer. Adventure Mode is the story mode, which is available with either a "Classic" or "Nitro-Fueled" option. Beyond the main single-player campaign, local and online play are also available, as well as challenge and battle modes. As part of the game's post-launch content plan, new tracks, characters, challenges, and items are due to be released for free as well.

Adventure Mode is a wild ride, featuring 17 tracks for you to master and countless challenges to complete. Interestingly, the mode offers a choice between the Classic version of the game and a new Nitro-Fueled version. True to the original, the Classic option forces you to select only one racer to play the entire campaign with, doesn't allow you to tweak difficulty settings, and allocates you the basic cart which you cannot alter; meanwhile, the Nitro-Fueled option allows you to switch your racer any time you choose, adjust your difficulty setting anytime, and customise your cart as you unlock different chassis and other accessories. I can't imagine myself ever playing through the campaign with the Classic option, but I am sure there are purists who appreciate its inclusion.

If you've ever played a cart racer before, the chances are that - like me - said racer will be Mario Kart, but starting your first race, it very quickly becomes evident that Nitro-Fueled is wildly different to Nintendo's flagship racer. I initially selected medium difficulty, but quickly found myself questioning if I should lower that selection, which fortunately you're able to do with Adventure Mode's Nitro-Fueled option. The learning curve for this game is steep, and it took a good few races before I started to become familiar with the mechanics and track environment interactions important to winning races.

Arguably Nitro-Fueled's most important mechanic is the power slide, which is completely unique - previous experience of Mario Kart certainly won't help you here. The simple part is steering your cart in the direction you want to drift; the unique component is the charge meter, located in the bottom-right corner of the screen. When the charge meter turns red, you need to tap the opposite trigger to the one you used to perform the boost; this happens three times in quick succession and you have to hit the timing perfectly to receive the final boost, which provides an enormous amount of extra speed. You don't just want this extra speed to win races - you need it. The skill level of the AI is high, and if you don't maximise your power slide opportunities, you'll lose races because of it. All of that said, I didn't find the difficulty level of mastering the power slide to be a deterrent; instead, I found it to be rewarding when I reached a point where I could perform the manoeuvre reliably and accurately.

It isn't just the incredibly smart AI you need you watch out for, either: the track environments have many moving obstacles that can flatten you or obstruct your progress in some way, so you'll need to weigh your options when deciding where and when to power slide. I can personally confirm that losing a race because you chose to risk a power slide for some extra speed - and instead got crushed by a falling barrel - is extremely frustrating.

Nitro-Fueled also includes items like Wumpa Fruit and box items that impact the race. Wumpa Fruit may seem like an innocent collectable, but they are integral items that provide you with the extra advantage you need to win in many difficult scenarios. Once you've collected ten Wumpa Fruit, your maximum speed increases, and items that appear when you break boxes become "Juiced Up" - this means that the items you receive from these boxes are more powerful, and will give you more options to take out your opponents. There are 10 different base items like beakers and TNT creates, but I noticed very quickly that none of the available items are strong enough to turn the tide of the race in your favour if you aren't properly utilising power slides and Wumpa Fruit. There's no Bullet Bill to speed you to the front of the race and put you back in contention for the win; items will only help you if you are strategic about using them and are close enough to the other racers to hit.

Once you have combined your mastery of the mechanics, items and Wumpa Fruit, and careful navigation of the constantly moving environment, then you will start to win races more consistently. I found myself racing on the same track many times until I was able to place first - a requirement during the campaign to progress - but I didn't find myself getting frustrated; if anything, it was a rewarding experience. The campaign also mixes it up by providing challenges to complete rather than just racing to beat your opponents. The variety of challenges are clearly designed to test your attention to detail and problem-solving skills, an experience I didn't expect from cart racing game.

In addition to the main Adventure Mode, the game also offers a battle mode and a challenge mode. Battle mode includes twelve uniquely designed areas, but all feature the same basic goal, essentially tasking you with trying to take out or avoid your opponent to capture a flag or collect crystals. This mode would clearly be great with friends, but it isn't a mode that you're likely to play in by yourself for any length of time. Challenge mode is similar in that regard; it includes challenges such as racing against your ghost to try to beat your own times, crystal collection with a countdown, CTR letter collection, and Relic format racing. CTR letter collection racing requires you to find and collect each of the three letters while also winning the race, and Relic format racing tasks you with breaking boxes to put extra time on your race clock so you can complete the race before you run out of time. I really enjoyed the CTR letter collection races, but since they're also available in the main Adventure Campaign, there isn't much incentive to enter Challenge Mode to play them specifically. As for the Relic format racing, I found it incredibly challenging and only really enjoyed it when I was in the mood to tackle a high-difficulty race. As with the CTR races, the Relic format races in the adventure campaign were more than enough for me in this case as well.

CTR Nitro-Fueled features completely upgraded graphics for all the racers, carts, and tracks, and the beauty of this game blew away my expectations. The high-quality textures and environments aren't just great to look at while racing, but they also do justice to the extensive customisation options when it comes to characters and carts; these options are unlocked as you progress through the game and complete different challenges. I always enjoy the ability to customise my character to my personal preferences, so I appreciated the vast array of options they presented. The only criticisms I found in this department are incredibly long loading screens - recently patched, but still too long - and very dated looking menus.

In revamping and reworking a fan-favourite such as Crash Team Racing, Nitro-Fueled offers a challenging, rewarding cart racer based on one of the most nostalgic characters in video game - particularly PlayStation - history. This isn't a game for someone looking for a casual experience, but it's a perfect match for the racers among us who get a thrill from seeing how practice and mastery of the mechanics leads to a victory that has real meaning. 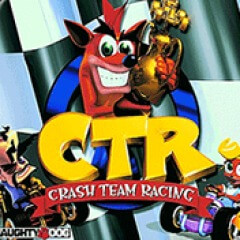