Review: Atelier Ryza: Ever Darkness and the Secret Hideout

This incredibly creative and original JRPG isn't afraid to use novel systems and thoughtful world-building to great effect.

Atelier is a Japanese RPG (or JRPG) franchise with a storied history spanning more than 20 years. The series features a range of titles released primarily on PlayStation systems in that time, with some Japan-only titles making appearances on the SEGA Saturn, Nintendo DS, and even the Game Boy Color. Building worlds around the concept of alchemy and forging a team to challenge an antagonist, the Atelier series has explored different stories with an enormous cast of characters since its inception in 1997. Atelier Ryza: Ever Darkness and the Secret Hideout introduces the charming Ryza and her adorable group of friends, children in a town where nothing remotely exciting ever happens - until it does, and their adventures begin.

In truth, "charming" is an understatement when trying to describe Atelier Ryza's characters and story. Ryza is just another country girl, bored out of her mind with her provincial life; she takes every opportunity she can to run away from her farm chores to seek out her best friends, Lent and Tao, and drag them off in search of adventure. The story starts just as strange happenings - accompanied by the even stranger pair of Alchemists Empel Vollmer and Lila Decyrus - begin to occur on Ryza's sleepy island. The arrival of a wealthy merchant also presents a new friendship for Ryza in the form of the merchant's daughter Klaudia Valentz.

The story is a slow burn, but the pacing isn't a negative; the game focuses on the characters from beginning to end, so don't expect to be faced with missions advancing to the defeat of a final boss, or an antagonistic figure that threatens the entire world. The stakes may seem smaller on the face of it, but it didn't adversely affect my enjoyment of the game, which does an excellent job developing emotional investment in the main characters, and you'll watch over time as their relationships grow and develop little by little. The game also takes time to explore more mature issues like bullying and even domestic abuse through its storytelling.

Atelier Ryza shines in regard to its Alchemic Synthesis systems. It features an extensive alchemy system, as all Atelier games do, but has managed to build a convenient, visually attractive interface around it. Once you've gathered the required ingredients for Alchemy recipes, you can return to Ryza's room, where interacting with a large pot activates the alchemy menu. As a newcomer to the Atelier series, I didn't find myself overwhelmed by the many options and processes available in these menus; the game's tutorial does an excellent job exploring how to complete different steps in the alchemical process to eventually synthesize the needed items to complete missions or enhance your team's stats. The synthesis process can be as deep or as shallow as you want, with simple recipes requiring easy to collect materials and only a few steps to complete, or complex recipes that require hard to find ingredients and many complicated steps. The systems naturally gear themselves to the player, so whether you're a long-time player looking for a very deep experience, or a new player that just wants to mix a simple health potion, you're good to go.

The actual physical appearance of the system resembles a spider's web, with different nodes corresponding to certain ingredients, and various strings you can follow to synthesize different items from similar ingredients. It sounds complicated, but once you actually see how it's arranged on your screen it becomes straightforward, and with visual representations and descriptions of each required material, you should have no problem following the synthesis instructions for your desired item. I also really appreciated that if you navigate through the menus for a particular material, the game will often direct you to the location of that material; there were only a few items that didn't work for, either because I hadn't accessed the specific area for that item or because of its rarity.

Atelier Ryza also introduces a combat system that makes battles less repetitive and more fun. The game doesn't subscribe to the more traditional turn-based battle model, instead introducing a fast-paced real-time battle menu that syncs with characters' turns in battle. Circles with each characters' portraits cycle quickly across your screen and it will be up to you and your reflexes to make quick decisions on who you want to command to do what. If you move too slowly, your enemies will not show mercy, inflicting damage while you stand around like a dolt. You can switch between your different party members to create special ability strings, so be sure to experiment with different controls and combinations to discover strong chains.

I adore the visuals in this game. No one has ever suggested that the Nintendo Switch is a powerhouse, but I'm starting to wonder what kind of magic is packed in there, because Atelier Ryza presents a gorgeous mix of textures and colours. There is very minimal pop-in, and I didn't notice any glitches during the time that I played. The main story took me around 30 hours to complete, and I would imagine if you did all of the side-quests, it would likely add another 15 hours or so to your overall playtime.

Atelier Ryza: Ever Darkness and the Secret Hideout is a pristine, high-quality effort from start to finish, representing a stand-out title in the JRPG genre for 2019. It's refreshing to play a game where the story revolves so much around the characters rather than the antagonist. As a first-time player of an Atelier game, I was enchanted. Likely a JRPG that will fly under the radar, it is a game that is worth your time, even in the crowded playing field. 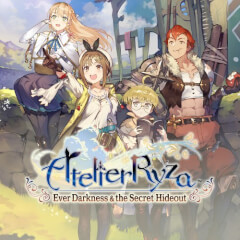 Atelier Ryza: Ever Darkness and the Secret Hideout